Our friends Sonja and Peter have only been living on their new farm near Temecula (in Southern California), where we visited them yesterday, for six weeks. The sun was already setting and bathed their house, the giant stones and the ancient trees on their premises in a beautiful light when we arrived. They showed us around their estate, and I could even feel the energy of two very strong power places, which reminded me of the so-called “vortexes” (energy spirals) in Sedona.

Funnily enough, we spent the night in their brand-new trailer, which made my heart jump with pleasure! (As I have already mentioned several times in this blog, I probably was a settler and toured around in a covered wagon in this country in former incarnations 😉 ).

At night, we had surprise visitors, which I unfortunately did not witness, but Gerd awoke suddenly and felt strong energy fluxes flowing through his body. With him, this usually is a sign for the presence of angels, Ascended Masters or patron saints, but this time it was someone else who was paying him a visit: It was the souls of Native Americans and of those settlers who had lived on these premises generations ago. But they were not the only ones who came to visit, but also nature spirits connected with the energies in Mount Shasta. They asserted that our friends are very welcome as new estate owners and are appreciated by them, because they intend to leave nature as it has been for centuries.

The presence of the spiritual Native Americans and nature spirits lasted for several hours, and they only withdrew when Gerd asked them to. Thus, he still got some sleep before sunrise. And our friends’ resolve was further strengthened when they learned about the nightly visit. 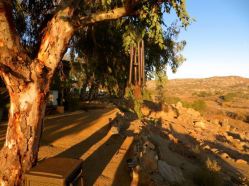