Here in the Languedoc area (Southern France) Cathar castles are lined up on the mountaintops like pearls on a string. Today, we first headed south to visit the half ruined medieval Cathar castle of Quéribus. During the Albigensian Crusade, directed against the Cathars from around the commune of Albi, many desperate people found refuge in the isolated and impregnable castle.

We were rewarded for the half-hour climb up to the ruins with an impressive view over the area of Languedoc. We could see all the way to the peaks of the Pyrenees, the range of mountains forming the boarder between France and Spain. And we truly enjoyed the fantastic panoramic view.

The ruins still show why it was impossible for attackers to storm the castle. This is the place that used to serve as a refuge to the Cathars during the Papal persecutions. With its energetic and historic spots that offer wonderful views of the country it nowadays attracts many spiritual people and avid travelers.

After an excellent lunch in our castle hotel in Couiza we ventured out again. Our afternoon´s destination was Rennes-le-Château, which is located on a hill near the village we are staying in. This town should be well known by all of you who have read Kathleen McGowan´s “The Expected One”. It is considered the stronghold of the worship of Mary Magdalene in the Languedoc region. One of the main reasons was the legendary priest Bérangere Saunière who allegedly found the Cathar´s treasure in the 19th century gaining big fortune. It is a fact that he did not only renovate the church and was responsible for its unique design, but also owned the Villa Bethania and Tour Magdala, which are still the focus of interest for visitors of Rennes-le-Château. We allowed sufficient time to explore this legendary place and also visit the museum. The evening concluded with an energetically strong channeling for the group and a wonderful dinner. 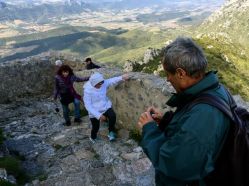 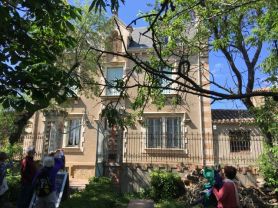 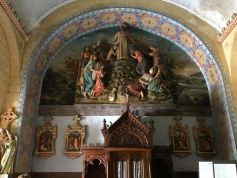