In 1896 a papyrus codex from the 5th century was found in Kairo. It contained the gospel of Mary Magdalene. Interestingly, it is not a gospel by Mary Magdalene, but about her. Well known religious scholars, among them Karen L. King of Harvard Divinity School (USA), have translated the document. It offers a fascinating insight into the origins of Christianity and allows for a new view of Jesus’ doctrines as a way to receive spiritual knowledge. And it shows that the common misconception that Mary Magdalene was a prostitute is nothing more than theological fiction.

How did it happen that the Roman Catholic church “misunderstood” Mary Magdalene to be a prostitute. Who came up with this rumor? One could suspect that the composer of the gospel of Luke misunderstood the original story of Jesus’ anointment by Mary Magdalene as the “woman with the alabaster jar”, because it was written down 50 years later. Because this anointment was similar to a widely known custom, that was carried out by holy priestesses or the goddesses’ “temple prostitutes” in the Roman Empire. The correct description for these priestesses was “Hierodulae” or “Holy Women”, not “prostitute”.

During my travels through Provence I stumbled upon many depictions of Mary Magdalene with the alabaster jar. The photos posted below were taken in the cathedrale of Aix-en-Provence, which I visited with my tour group during the spiritual trip in the fall of this year. 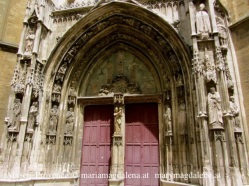