The gospel of Luke states that some of Jesus’ followers were women, “…and certain women who had been healed of evil spirits and infirmities: Mary that was called Magdalene, from whom seven demons had gone out” (Luke 8:2). At least, this is the official version of the Roman Catholic church which held up as the “truth” till the present.

It is interesting to know that the Essenes, which Jesus was a part of, used certain words as ciphering in order to prevent the Romans from understanding their messages and gospels. (The well known theologist Barbara Thiering from the University of Sydney wrote the most comprehensive study on this topic.) The Essenes used terms like “the blind” for those people who didn’t follow the “path”. The word “leprose” refers to people who weren’t born into a higher class or who were excluded from such a class. The “poor” were those members of the community who actually held high ranks, but who were required to give up all worldly possessions.

In this sense, the word “demons” cannot be understood literally either. The name Maria (Mirjam) was seen as a title of high honor during the peak of Qumram. During that time, women with this name held high spiritual appointments within the religious communities. For example, these women were trained in the art of healing or lead liturgic ceremonies for women. These women were bound to celibacy and understood the authority of the highest scribe. During the times of Mary Magdalene, the scribe was Judas Iskariot, who was described as the “seventh demon-priest”. Before Mary Magdalene got married, Judas released her from celibacy and this is where the phrase “seven demons were cast out of her” came from. After that occurred she was allowed to have physical contact with her husband, but only according to strict rules. (See: Jesus the Man: New Interpretations from the Dead Sea Scrolls by Barbara Thiering, chapter 17) But I will tell you about that another time.

The pictures to this blog entry were all taken in Provence. The first photo shows a beautiful glass window, which depicts the arrival of Mary Magdalene, Martha, Lazarus, Maximinus, Maria Jakobaea and Maria Salome. I uploaded the other photos to depict the energy this lovely region emanates. 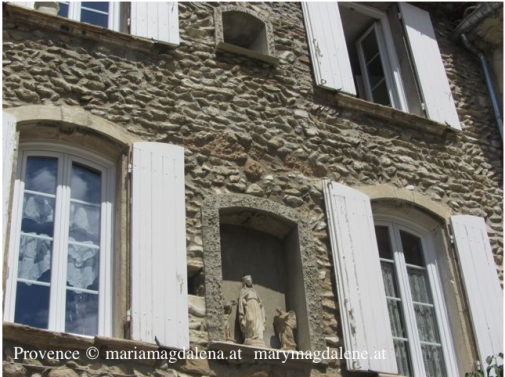 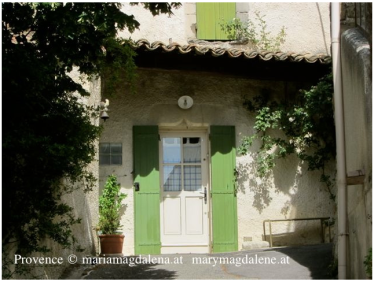